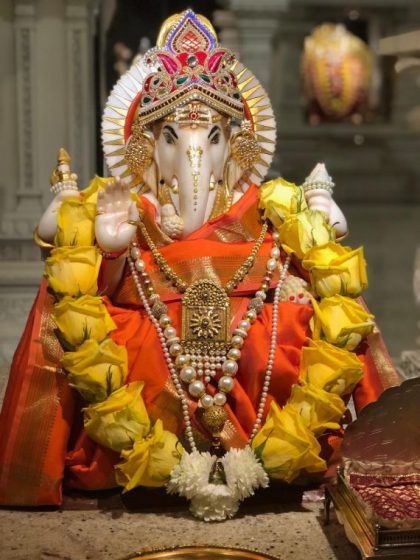 
Lord Ganesh is the son of lord Shiva and Parvati. He is called the supreme Brahman expressed and propagated in the Vedas and Upanishads.Lord Ganpati is the remover of all the obstacles in life so he is worshipped in the beginning of all the auspicious festivities. He is the leader of all the Gods for his divine and unique qualities. He is the ocean of knowledge and source of pure intellect. He is the provider of peace, prosperity and wisdom. The devotees offer him Modakas or Laddoos.Ganapati Pujan (worship) is popular in all parts of the world with minor changes in name and mode of worship. The devotees celebrate Ganesh Chaturthi, the day of his birth, with great enthusiasm. He fills the devotees with the strength and ability to follow the path of nobility and Divinity.


Ma Saraswati Ji is the goddess of knowledge and wisdom. She is  worshipped by the teachers, students, intellectuals and all the devotees seeking wisdom. She holds a book, rosary and Veena in her four hands. Her complex is like that of moon. She provides the knowledge of both Para and Apara Vidya, the knowledge of Gyan and Vigyan. She rides on a swan. Swan has the ability to separate milk and water. This ability to separate is called Neer Kshir Vivekâ or Vivek Buddha. The devotees who mediate on Saraswati ji can distinguish between good and evil, right and wrong. They can choose the divinity and nobility and leave the evil and sin in life. 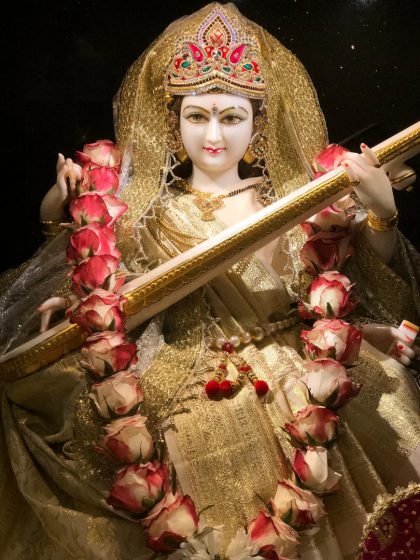 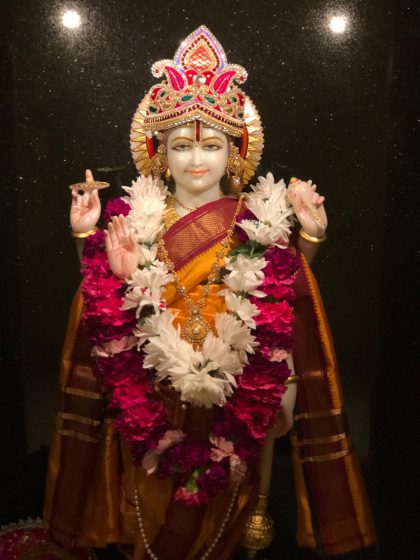 
Lord Satyanarayana is the personification of  Brahman as the Truth Being.  He represents truth and personifies truth in action (dharma). The true worship of Sri Satyanarayana involves the truthful performance of obligatory duties, practice of truth in daily conduct, and commitment to truth in all aspects of life. The ritual is a promise (or vow) to God that one lives truthfully and honestly in the service of God (Narayana) and works for one’s salvation. Truthfulness is one of the highest virtues in Hinduism. Without it one cannot achieve liberation. Truth has to be worshipped not only ritually but also spiritually. The mental and spiritual worship of the Lord of Truth is more important than the physical and superficial worship. The Satyanarayana Puja serves as a reminder that one should practice truth and embody it in oneself through righteous and truthful conduct.


Lord Shiva is worshipped by all Hindus throughout the world. He promotes welfare so he is called Shiva. He is called ˜Mahadev, the greatest of all the Gods. He sipped the poison and saved the Gods so he is Mahadev. Bhawani and Shankar are the embodiment of Devotion and faith. The Yogis cannot realize the Brahman seated in their own heart without the blessings of Shiva and Parvati. Lord Shiva is also known as Mrityunjaya. The devotees who worship him get rid of the fear of death. He is the only one who is worshipped by Gods, demons and human beings alike. There are twelve Jyotirlingas, the holy places or worship where people from all over the world go for pilgrimage. 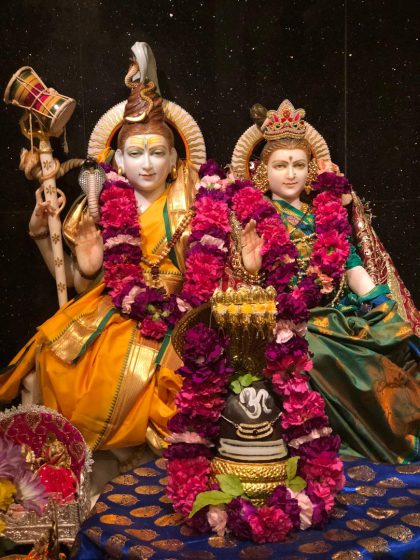 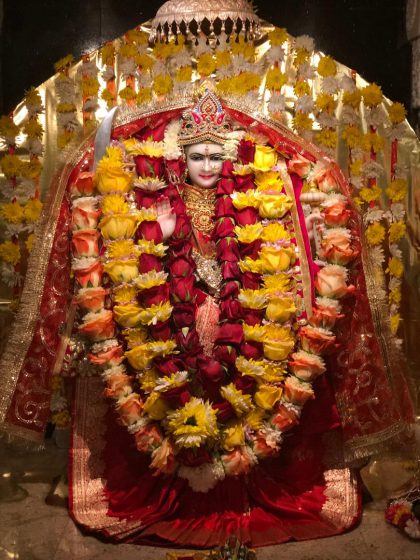 
Amba ji (Durga ji) is the symbol of strength. She rides on lion who is the most powerful and brave animal. Amba ji (Durga ji) helped the goods in their fight against the demons. When gods could not kill the demon Mahishasur, they were sad. From the body of each god came out the radiant light and that divine light took the form of the goddess having eight arms. Each god gave his best weapon to her and requested her to help them in the fight against the demons. Bhagwati Durga killed him ultimately. Not only she killed Mahishasur but also killed the demons Chand, Mund, Shumbh, Nishumbh and Rakta Veej. In the fight against Rakta Veej other forms of Devi such as Maha Kalika, Brahmani and others also helped her. There are nine names of Durga ji mentioned in Durga Sapta Shati.


Shri Ram and Sita are the incarnation of Lord Vishnu and Laxmi. Bhagwan Ram was son of King Dashrath and Queen Kaushalya. He is called the embodiment of Dharma. He performed his Dharma in his day to day life as an ideal son, brother, king and above all as a perfect human being. So, he is also called Maryada Purushottam Bhagwan Ram. He destroyed the demon king Ravana and his supporters because they were exploiting the innocent Rishis, Munis and devotees of Lord. They were spreading evil, sin, cruelty and injustice in the world. They were destroying the path of truth and nobility. Lord Rama punished these demons and unfurled the flag of truth and right action burning in the storms of sin and cruelty. He embraced the poor, backward and innocent like Shavari, Nishad and Jatayu. His Ram Rajya, the rule of peace, prosperity and joy is the dream of every individual. 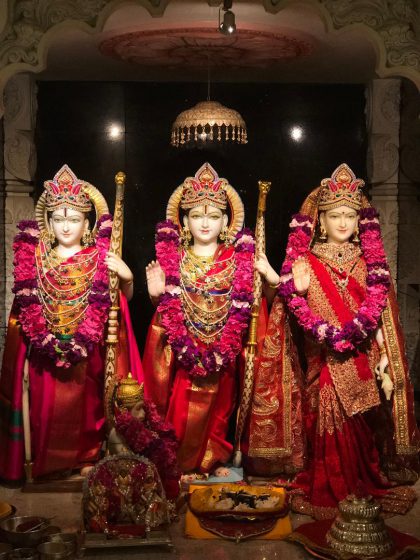 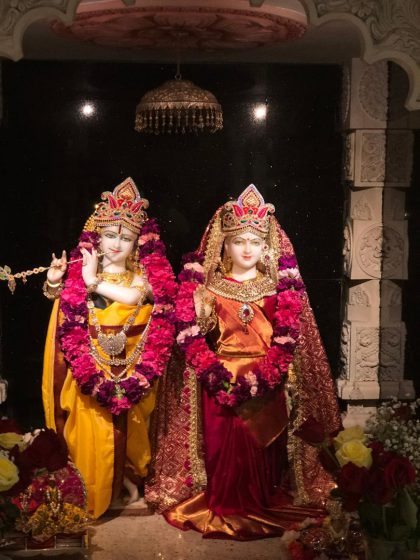 
Shri Krishna is the incarnation of Lord Vishnu, the preserver of this Universe. Shri Radha Ji is his strength and a source of inspiration. Lord Krishna’s incarnation is incarnation of love and Shri Radha Ji is the embodiment of pure, selfless and ideal love. Lord Krishna spreads the holy nectar of Shrimad Bhagwad Geeta in the whole world. He taught the world the art of leading the life. He explained to the world the science of self realization and propagated the importance of Devotion in life. These are known as the Gyan, Karma and Bhakti yoga. These are inter connected and not in water tight compartments. He helped the Pandavas and inspired them to fight against injustice. Ultimately they were crowned with success. He is called Jagad Guru, the teacher of the whole world because his teachings are not only for the Hindus or Indians but for the whole humanity.


Tirupati Balaji is also known as Sri Venkateswara or Srinivasa. Legend has it that once Vishnu left celestial abode, Vaikunta,against his consort Lakshmi’s wishes, to be the chief guest at a ceremony performed by a sage. On his return he discovered that Lakshmi had left Vaikunta and settled on Earth. Vishnu followed her down to Earth choosing to incarnate as Srinivasa and searched high and low but to no avail. He pursued his relentless search to the point that he became famished and unable to move. Around him an anthill grew. Brahma and Shiva in consultation with Lakshmi devised a plan to save Vishnu from his predicament. Shiva was to assume the shape of a cow, Brahma that of a calf, and Lakshmi that of a cowherdess. Lakshmi sold the cow and the calf to the King of Chandragiri. Soon after, the cow started behaving quite strangely. Everyday in the forest pasture, she would empty her milk into the hole of anthill to feed Vishnu. The King’s cowherd discovered this secret and hurled an axe at the cow while she was feeding Vishnu. Srinivasa, assumed by Vishnu) sprang up from the anthill to save the cow and in the act took the blow upon him self.Â Blood flowed from his head wound and cowherd fainted at the site of the accident.Â The blood-stained cow returned home, whereupon the King discovering his folly and begged for and received Srinivasa’s forgiveness.Â There are many stories connected with Srinivasa’s greatness and redeeming powers.Â Devotees make regular pilgrimages to the Bala ji temple at Tirupati. 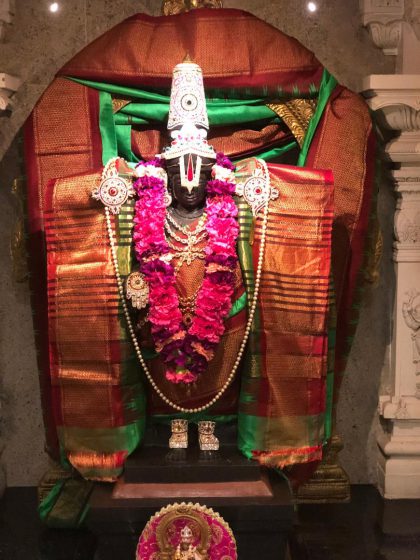 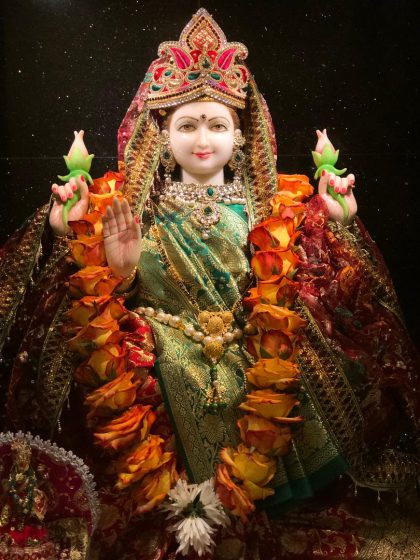 
Maha Laxmi Ji is the goddess of providing peace, prosperity and happiness. When the gods and the demons churned the ocean in order to get the nectar she appeared along with the 14 Ratnas (jewels). She embraced Lord Vishnu and put a garland of flowers around his neck and accepted him as her swami. Her four hands indicate that she provides ‘Artha, Dharma, Kaam, and Moksha popularly known as Purushartha Chatushatayas to her devotees. She sits on a lotus seat. Lotus is a flower which blooms and grows up in mud. There is mud all around it but it is not at all affected by the mud. The people who seek the blessings of Maha Laxmi Ji are also not affected by the evil in this world. People want her blessings and, especially, on the day of Deepawali people worship her with great enthusiasm.


Shri Hanuman ji is the son of Mother Anjani and Kesari. Hanuman ji was born with the blessings of Pawan Dev The Wind God so he is also known as Pawan Sut. He is the incarnation of Rudra so he is also known as Shankar Suvan. Lord Hanuman ji is the embodiment of loyalty and Seva Dharma. He served Bhagwan Ram with unique devotion and Lord Ram himself said, he shall always be indebted to you and I can never repay you for your selfless service. O Hanuman! You are dearest to me. Hanuman ji is the source of physical strength, ocean of knowledge and provider of intellect. You will find temples of Hanuman ji even in the remote villages and towns in India. 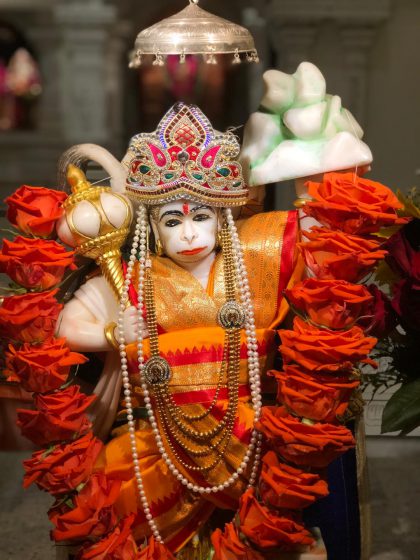